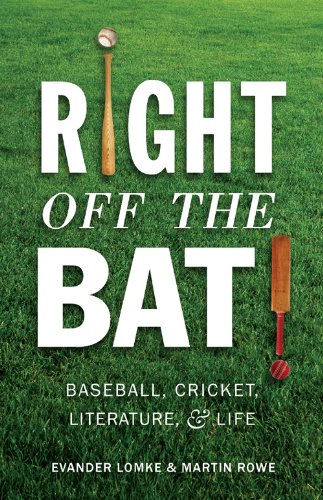 "Looking over the legends and stars of both sports, explaining the rules, complete with glossary, Right Off the Bat is a fine assortment of knowledge, very much recommended for any curious sports fan."—Midwest Book Review

It's been said that baseball and cricket are two sports divided by a common language. Both employ bats, balls, innings, and umpires. Fans of both steep themselves in statistics, revel in nostalgia, and toss around baffling jargon. In Right Off the Bat, baseball nut Evander Lomke and cricket buff Martin Rowe explain "their" sport—and their love of it—to the other sport's fans. You'll come away finding yourself as fascinated by legbreaks and inswingers as you are by knuckleballs and sliders (or vice versa).

Are you a dyed-in-the-wool baseball fan who nevertheless harbors a nagging doubt as to whether Babe Ruth was, in fact, the greatest athlete ever to swing a bat? When you think of cricket, is what comes to mind stuffy Victorians standing around in a field, twirling their mustaches and saying silly things like "Howzat" or "googly"?

Or are you a staunch cricket fan who sometimes wonders whether a screwball is really as difficult to execute as a doosra? Do you ask yourself where the thrill is in watching a ball sail 400 feet over a wall and just past the outstretched fingers of a fielder wearing a glove (and all for a paltry one run)?

Well, step right up and take a seat—you've got a lot to learn (for example, the very first international cricket match was played in the United States). And Right Off the Bat is just the book for you.

Evander Lomke has worked in book publishing for over thirty years and is the executive director of the American Mental Health Foundation. A lifelong Yankees fan, it's only right and proper that he lives in the Bronx, New York.

Martin Rowe is the co-founder of Lantern, a book publishing and media company, and author of Nicaea: A Book of Correspondences. A long-suffering supporter of the England cricket team, he lives in Brooklyn, New York.